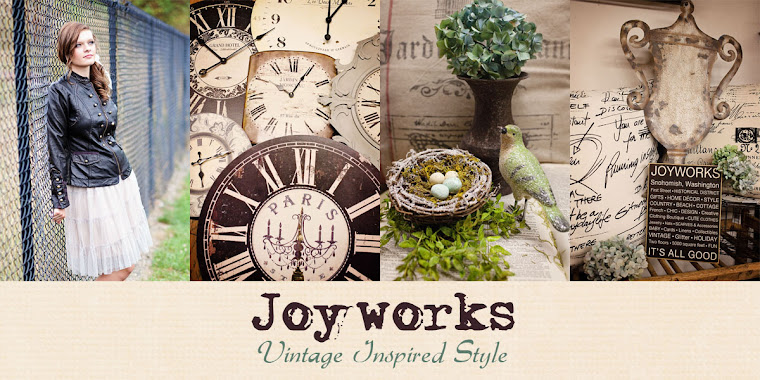 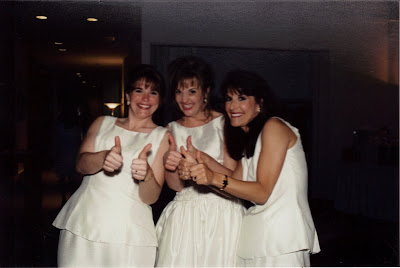 Tonight my good friends Nancy and Jane came over for our annual Labor Day get together. After dinner we went through some old pictures and had some good laughs. Those were the days...
Posted by Jana Johnson Label at 11:11 PM 1 comment:

Today I brought more vintage inspired Halloween out to display...This year we will be showing more black and white with orange being the accent color. Decorate with white pumpkins,black crows,black and white polka dots,black glitter candles,black cats, and black stars... Then add your pumpkins,figurines,lanterns,bottle brush trees,and postcards etc... for your traditional orange. It gives Halloween decorating a new fresh look.

When we go to gift shows I take pictures of some of my favorite showrooms for decorating ideas. Here are two pictures from the Bethany Lowe showroom. As you can see we can't order it all but we do have a few pieces.

This fall our fashion boutique has the cutest clothes! We have a great variety of coats,jeans,sweaters,blouses,hoodies,t-shirts,hats,shoes,and scarves. The colors this year are beautiful purples,blues,pinks,grays,reds,oranges,metallic,whites,and always black. Also don't be afraid of prints and plaids this season. Our clothing is reasonably priced and we have something for women of all ages.
Posted by Jana Johnson Label at 10:09 PM 1 comment:

Today we received in these adorable fur coats for baby. There are also blankets and fuzzy booties to match. So cute!!
Posted by Jana Johnson Label at 8:25 PM 3 comments:

I hate to think that fall is slowing arriving... The leaves are turning and the days are darker and colder. But to make the days brighter I have new reasons to decorate and change displays. I love using shades of brown and decorating with acorns,squirrels,fall foliage and rusty urns.
Posted by Jana Johnson Label at 8:26 AM 1 comment: 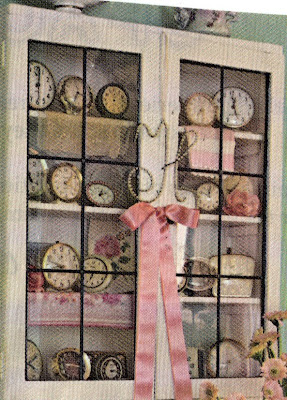 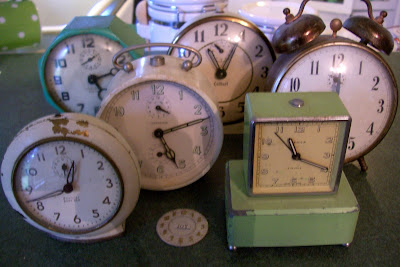 I have a small collection of vintage alarm clocks... but don't you just love this cupboard of clocks that I found in Romantic Country magazine!
Posted by Jana Johnson Label at 1:54 PM No comments:

This morning I am meeting my friends at Sand Point Antique Market which will be fun....but I'd much rather meet them at Tiffany's in New York... Today I think I'll look for rhinestone jewelry parts that I can use to make charms for my new necklaces.
Posted by Jana Johnson Label at 8:50 AM No comments: 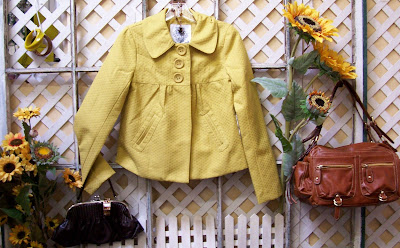 Look as pretty as a sunflower in this cute golden yellow swing coat for fall.
Posted by Jana Johnson Label at 9:01 PM No comments:

Over the years I have collected quite a large collection of costume jewelry and I thought it might be fun to see if I could use it to make some new baubles... At Joyworks we soon will be carrying more charms and chains so you can create your own charm necklace just for your personality!
Posted by Jana Johnson Label at 7:18 PM No comments:

I have a weakness for vintage house parts...mostly white.
I seem to be drawn to old windows,doors,knobs,pillars,shutters,finials,and moldings.Today I bought a prop from a showroom display that I just loved.It's half of a vintage white column base and it fits perfectly on my mantle.At the store we are always looking for vintage and reproduction pieces to sell.
Posted by Jana Johnson Label at 10:26 PM 1 comment: 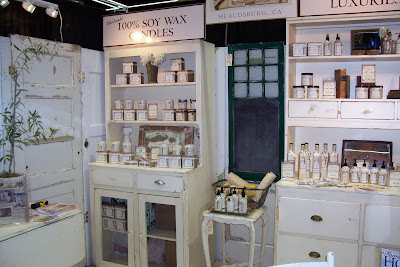 Today at the Seattle Gift show we picked up a new line of soy candles with very cute packaging from Vintage Home liftstyle. They not only smell good but are wrapped in vintage music,ribbon,and keys. I think they will fit in perfectly and will make great gifts.
Posted by Jana Johnson Label at 10:00 PM 1 comment: 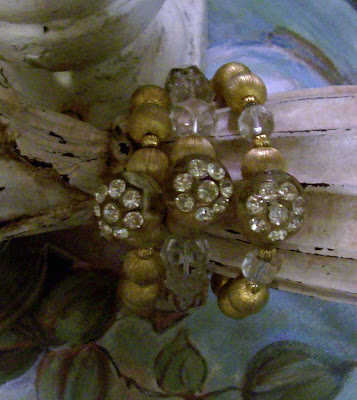 Today we went to the Seattle Gift Show to look for new product for the store. When we first get there we always like to run upstairs and look at the vintage items. This year I bought some vintage buttons with rhinestones and just knew I could make something with them. Here are the cute bracelets I made...
Posted by Jana Johnson Label at 9:03 PM No comments: 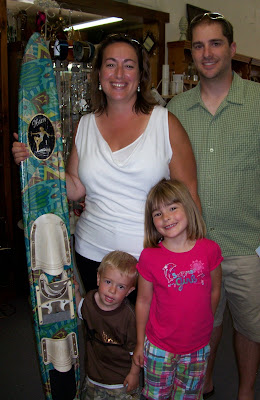 Katie Thielman and her family 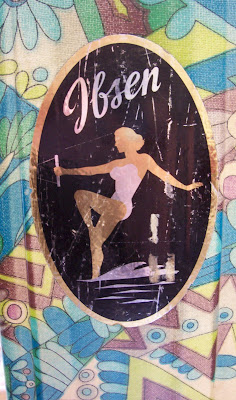 Yesterday Katie brought this vintage 1960's water ski to the counter which was in our summer window display. She was very excited to see it because her grandpa Don Ibsen had manufactured the ski in Seattle and also had invented the water ski. We sadly told her that it wasn't for sale at this time and that we were borrowing it from a friend but we might be able to work something out... It was great fun to hear her story about her grandpa and all his adventures.
Here is his story:

In 1928, Don Ibsen, a graduate of Seattle's Roosevelt High School and an avid sportsman, co-invents water skis in a series of experiments on Lake Washington. He is one of three inventors of the sport, who were unknown to each other. Ralph Samuelson invented water skis in 1922, on Lake Pepin in Lake City, Minnesota, and Fred Waller thought he was inventing the sport on Long Island in 1924. Ibsen, a showman and entrepreneur, was a leading enthusiast and popularizer of the sport.
Inventing the skis was Ibsen's preoccupation during the summer of 1928. As Adam Woog writes in his Sexless Oysters and Self-Tipping Hats, Ibsen tried attaching himself to motorboats with a rope and standing on boards made of wooden boxes, which didn't work terribly well, then snow skis, which didn't work either. Finally he carved two slabs of cedar, eight inches wide and seven feet long. He bent, sanded, and shellacked them and spent the summer on various Seattle beaches bumming rides from people with motorboats.

For the next few years, while working as a hardware salesman, he made numbers of pairs for friends and in 1934 sold his first pair of water skis for $19.95. He married in 1935, and he and his wife Dottie pooled resources from their day jobs to make skis in their basement.

He was a master marketer and an entertainer. He quit the hardware business and thereafter devoted himself to Ibsen Water Skis and related equipment and water-entertainment events. He was the first to use costuming in his act, and in 1954, Life magazine featured him waterskiing in a business suit, with a hat and briefcase, commuting to work.
Posted by Jana Johnson Label at 7:07 PM 1 comment: 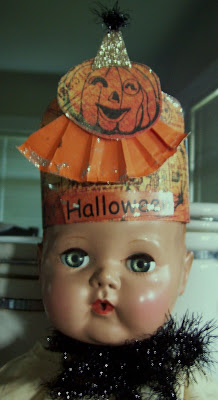 I know it's somewhat frightful and I don't want to spook you but I did put up a Halloween display in the back. This year we have some great vintage inspired Halloween so come on in if you want to treat yourself and get first pick.
Posted by Jana Johnson Label at 12:06 AM 1 comment: 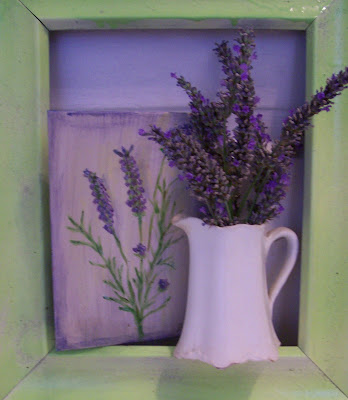 Today,on this hot summer day, my husband and I painted the bathroom at our rental house. The house needs so much work...but it does have beautiful lavender blooming in the front garden.
Posted by Jana Johnson Label at 6:32 PM 1 comment: 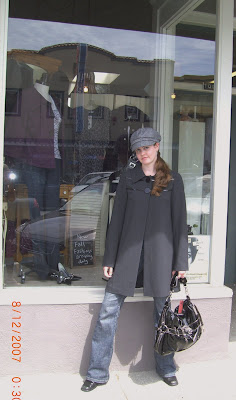 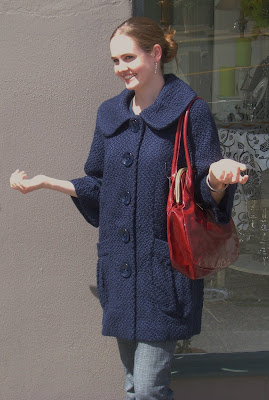 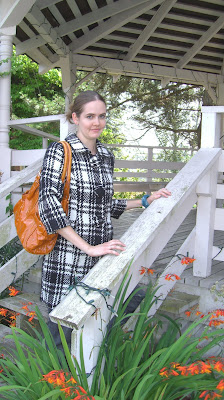 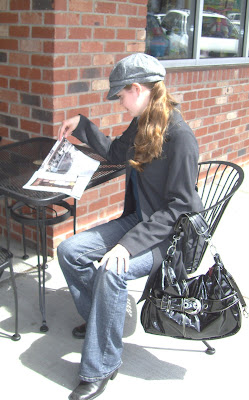 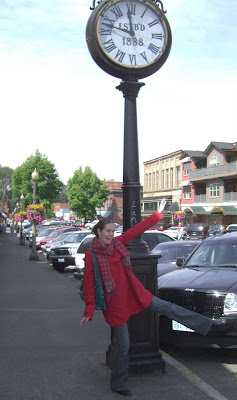 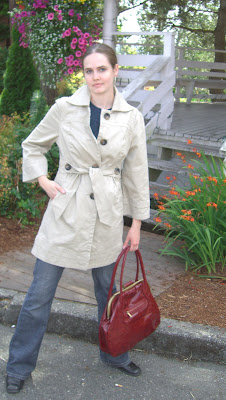 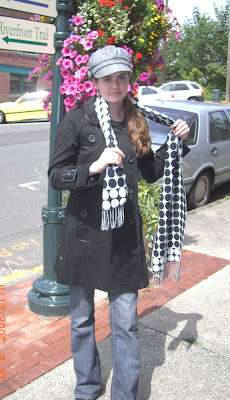 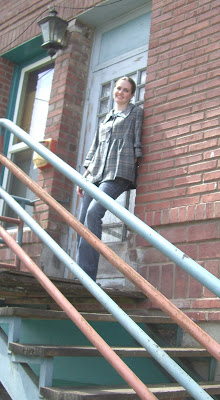 At Joyworks many of our cute fall coats have arrived! Janelle couldn't decide which one she liked best so she bought them all... She looks adorable as she strolls down First Street in Snohomish. It's a good thing Janelle's grandma told her how important it is to accessorize each coat with a great new handbag. It makes the outfit complete!
Posted by Jana Johnson Label at 6:19 PM No comments: 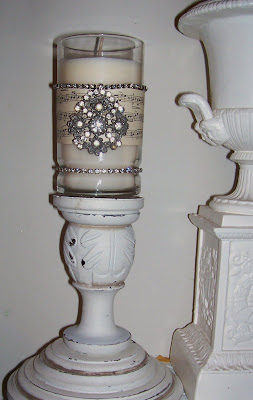 Today our Colonial Candle rep gave me this candle to sample. We are planning to order these nice burning candles for the holiday season. The label came off the jar easily which is great for those of us who like to embellish... I simply wrapped a piece of vintage sheet music around and attached a rhinestone pin using my glue gun. For more sparkle I went to my jewelry box and pulled out some bracelets and put them around the top and base.
Posted by Jana Johnson Label at 11:49 PM 8 comments: 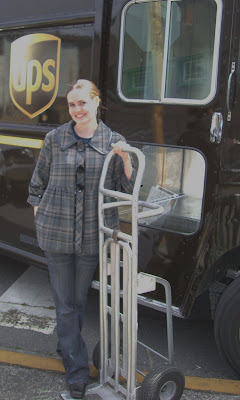 Today my stylists and I went on a photo shoot on the streets of Snohomish to model some of our new fall coats. It was very fun and here is a sneak peek of what's to come... What a cute vintage style coat!
Posted by Jana Johnson Label at 12:44 AM 3 comments: 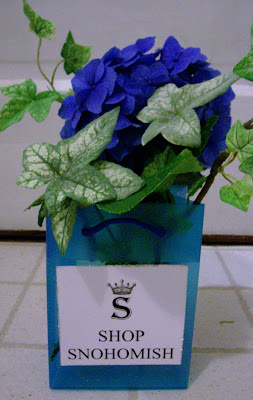 Tommorrow is the Snohomish Chamber BBQ and I'm in charge of the decorations. Tonight I've been working on the table arrangements. We decided to go with the Shop Snohomish theme and I made little shopping bags with a fun new logo. I'm going to lay down maps of Snohomish on the tables and put two shopping bags filled with flowers in the center.
Posted by Jana Johnson Label at 11:39 PM No comments:

On one of my junking days I was excited to find this box of vintage French Vocabulary Cards. I knew that they would be fun to craft with as well as to learn a few French words. After picking out a few of the ones that I really liked I decided to sell them at the store for 25 cents each. I'm going to work on reproducing them for the store because I would like share some of these ones with you...

Yesterday a young couple came in and bought 60 cards. I asked what they were going to do with them and they said that they were going to use them at their wedding reception on the tables. The groom to be is from France and the bride to be is from America and at the wedding there will be a mix of French and English spoken. They thought it would be a great ice breaker for their guests to learn each others language. What a clever idea and I was excited that my cards were going to a wedding in France!
Posted by Jana Johnson Label at 11:05 AM 1 comment:

I love magazines and was excited to see the new Romantic Homes. This is a very fun issue and very inspiring!! I can't wait to get to the store and start decorating. I've been storing a vintage iron bed and I think it's time to bring it in and create a romantic and glam bedroom...
Posted by Jana Johnson Label at 10:44 AM 1 comment: 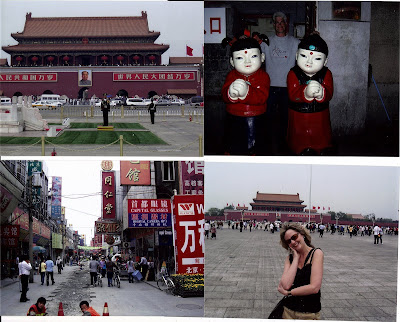 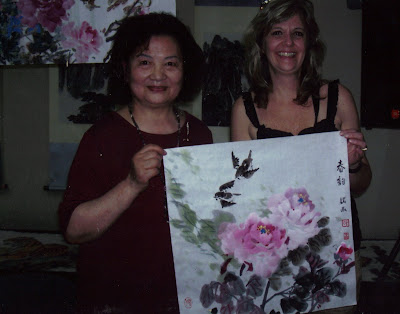 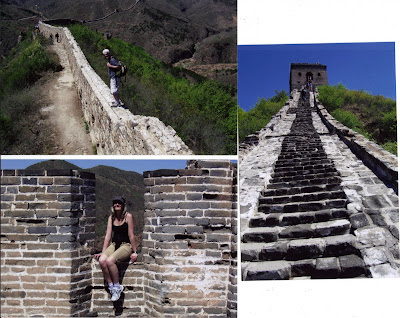 My husband and I love to travel and last year we went to Beijing in April. It was fun for us to watch the Summer Olympic Opening Ceremonies tonight and reminisce...

We had a great time in this busy city full of history,shopping,food,and people. We even found the antique district and I had a very talented artist paint a picture just for me...very cool!

On the day we went to the Great Wall the sun was shining and the sky was blue. Lots of steps but what a wonderful hike!!
Posted by Jana Johnson Label at 11:02 PM 1 comment: 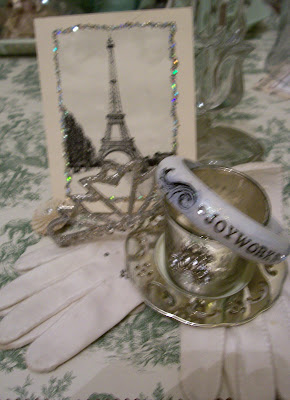 I love it when products come in and they inspire me to create. The image on these file folders is very fun and I couldn't wait to try out the new stamp set.
Tonight I made this cute Joyworks bracelet...the possibilities are endless...
Posted by Jana Johnson Label at 11:56 PM 1 comment: 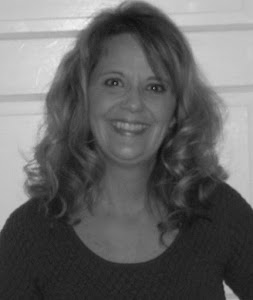 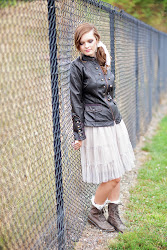